The northwestern part of Transdanubia seemed as a palaeolithic-mesolithic no man’s land, as we had knowledge only about stray finds and finds of dubious origin in that part of Hungary, from that time period. Of course there are not any real historic or geographical reason behind this situation. With the discovery of Páli-Dombok in 2014, things took a turn; now we have an extensive occupation from the Early Holocene in that region. 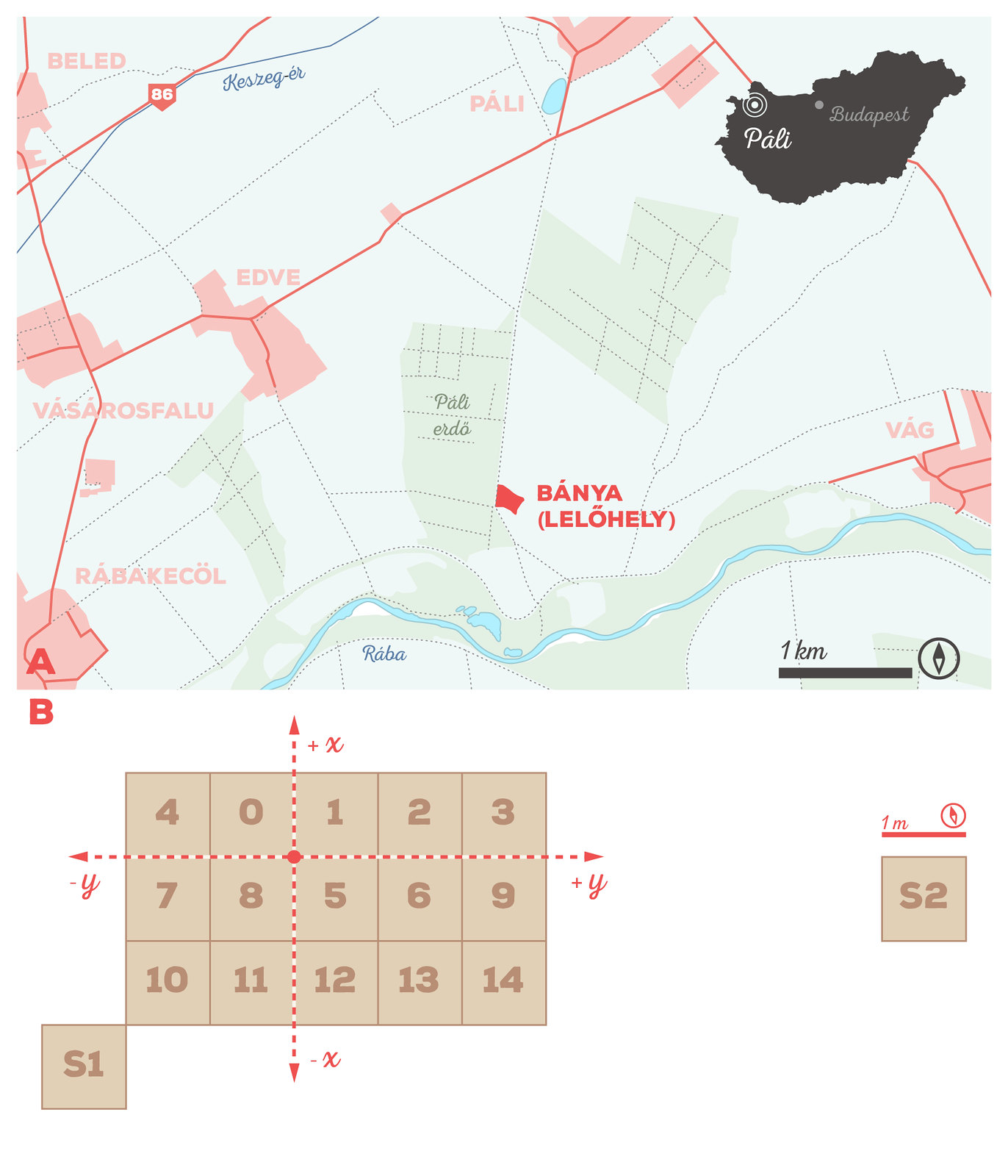 1. ábra. Páli-Dombok location in Hungary and the grid of the excavation. Graphics: Attila Király Original image

The village of Páli is situated in the region named Kisalföld (Little Plain), 60 kilometers Southwest of Győr as the crow flies. On the 28th of August 2014, János Hatos archaeologist assistant found five knapped stone artifacts in the sediments of the southern slope of an active gravel pit, at approximately two metres under the actual surface. The necessary salvage excavation was conducted by the Eötvös Loránd University Institute of Archaeological Sciences, with the leadership of Zsolt Mester, in two campaigns (november of 2014 and march of 2015). 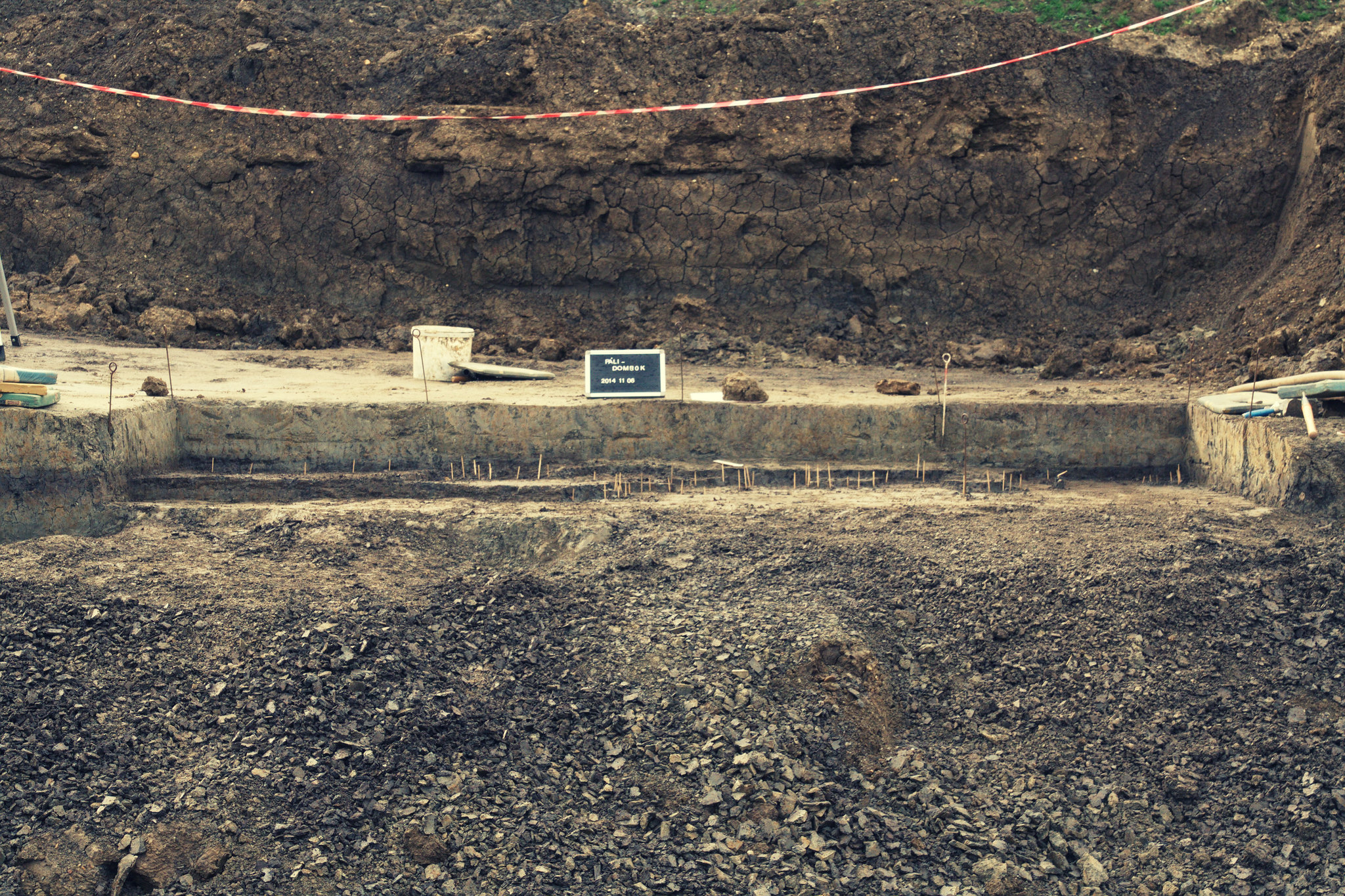 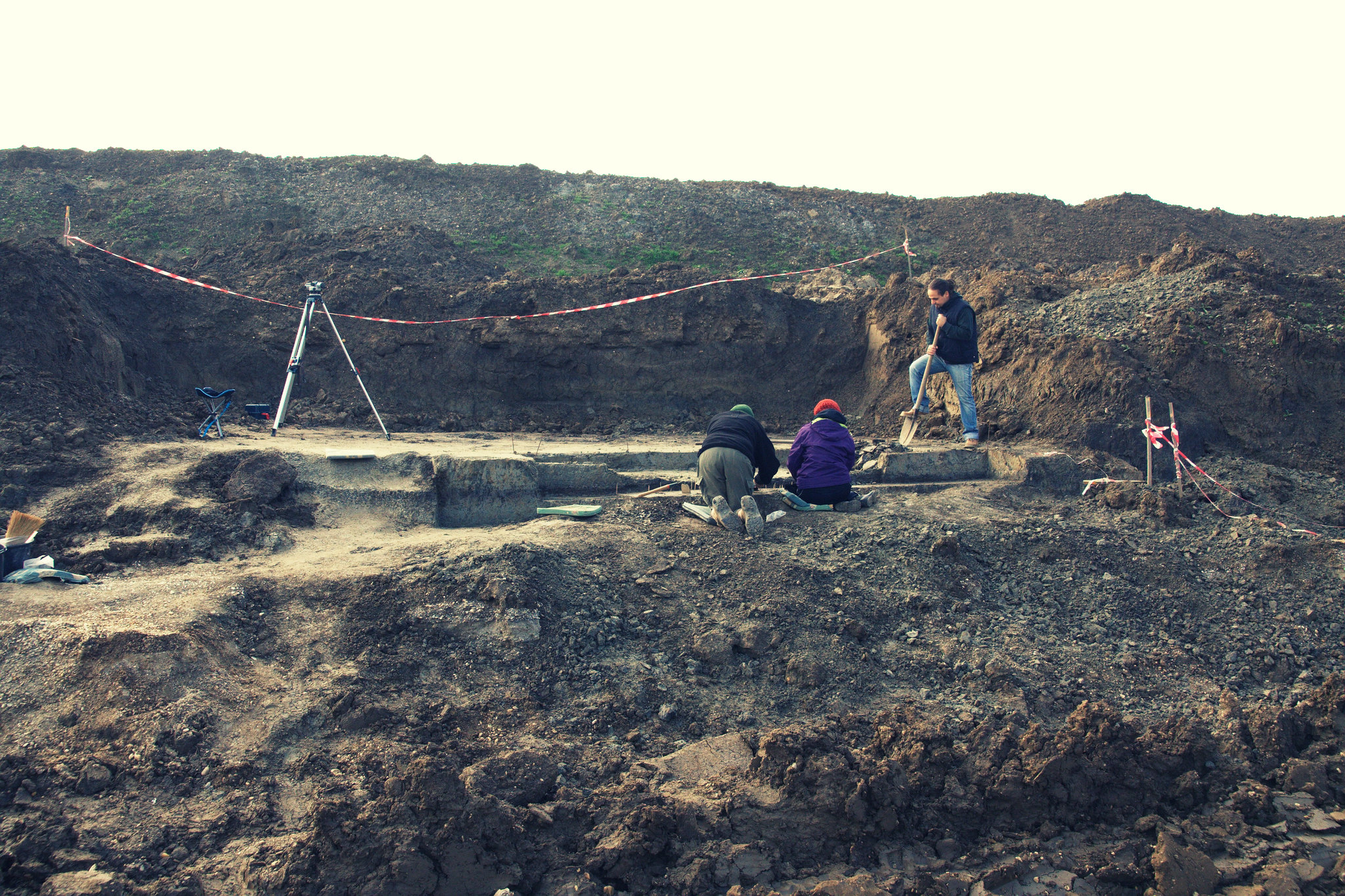 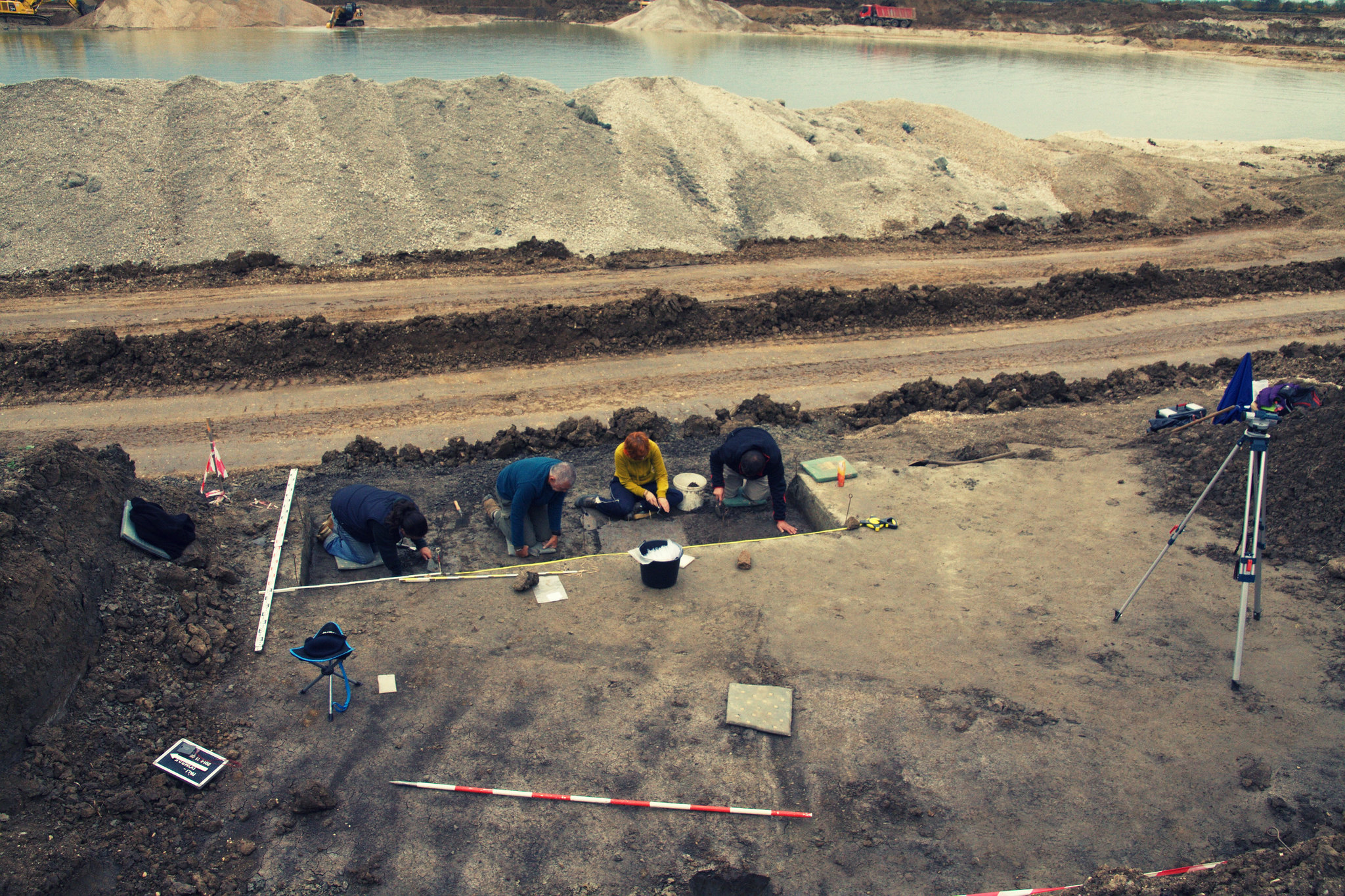 Figure 2 (above) The in situ positions of the lithics are marked with small wooden sticks. They draw a find horizon in the lower section of a dark buried loam layer. Photo: Norbert Faragó Original image

During the autumn campaign, it became obvious that the lithic material was lying in situ, at the lower section of a 15 centimeters thick, dark loamy layer. The main aim of the campaign in springtime was to uncover this horizont as extensively as possible. During the four weeks of work altogether, 15 square meters were excavated with hand tools and careful documentation, which is the approximately area of that particular lithic concentration. The find assemblage consists of 3346 chipped stones, 63 charcoal scraps, 67 pebbles and three teeth of a small Bovidae.

The chipped stone assemblage is remarkably homogenous. The only lithic raw material used is radiolarite, from the Bakony mountains in the southeast. Half of the lithics are smaller than 5 mm, 22,5% have a maximum dimension between 5 mm and 10 mm, the remaining 27,5% is more than a centimetre long. This size composition suggests local tool making activities, although cores are rare. The main tool types are end-scrapers, backed points, retouched blades and flakes, truncated blades, lamelles as well as triangular michrolitics. 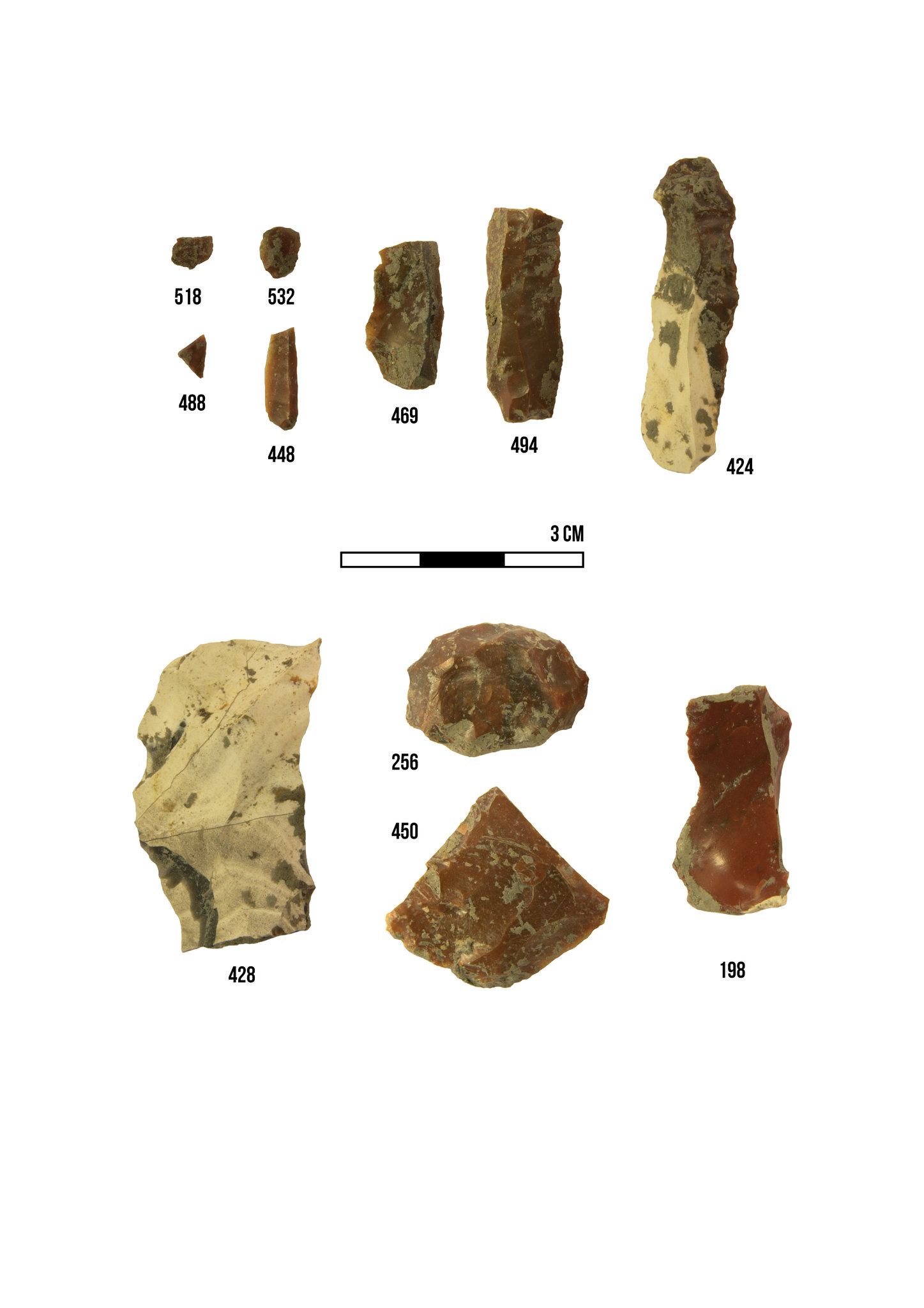 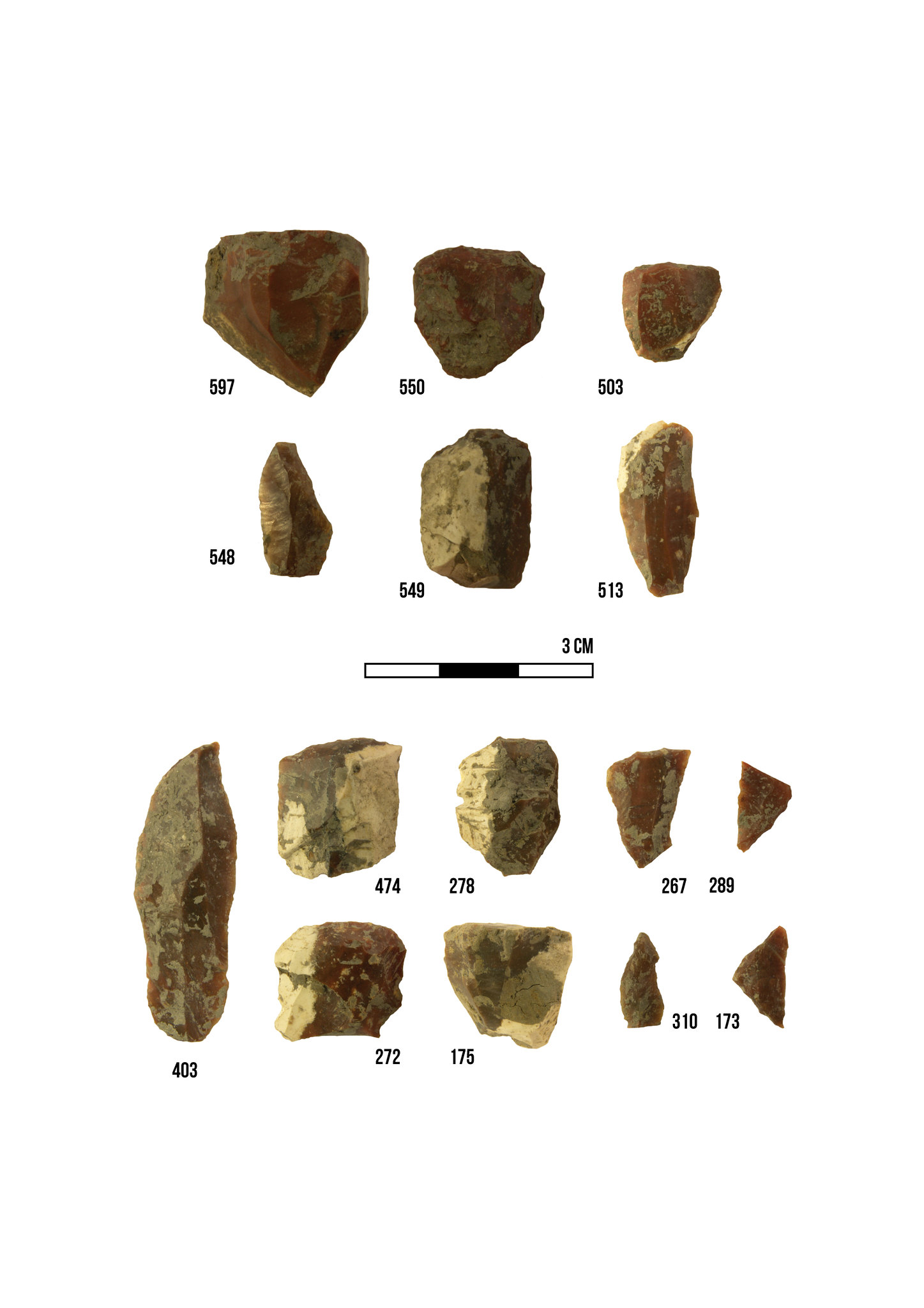 The tool composition and the presence of triangles points to an Epipalaeolithic or Early Mesolithic age for the site. We hope that we can support this preliminary observation with radiometric dating, the examination of collected charcoal and soil samples is underway.

The importance of Páli-Dombok partly lies in its geographical position. The site sheds light on the Early Holocene settlement of Transdanubia, an area which has a key role in the understanding of the Central European Linearbandkeramik origins and the neolithisation of the Carpathian Basin as well.