Report on the 58th Annual Meeting of the Hugo Obermaier Society, Budapest

Palaeolithic prehistory of Europe is not dissected by national borders, not governed by dynasties and not divided by wars. Great climate cycles and the diverse natural environment set the stage for research of the Homo genus, and in spite of heated debates, this research is united by the great questions of our common origin. For researchers of the Palaeolithic era, unity of Europe and the cooperative genius of mankind were never called into question, that was manifest at the 58th Annual Meeting of the Hugo Obermaier Society for Quaternary Research and Archaeology of the Stone Age.

This year the annual meeting was held in Budapest by the invitation of Prof. László Borhy, member of HAS, director of the Institute of Archaeological Sciences and dean of the Faculty of Humanities of the Eötvös Loránd University. The organization was realized by Zsolt Mester and his colleagues from the Instute, with the valuable help of the Institute of Geography and Earth Sciences and the National Museum for the excursions. Of course, the organizing committe of the Society had its invaluable work to put this great idea to motion, we are thankful to Prof. Thorsten Uthmeier, Dr. Werner Müller, Dr. Andreas Maier and Dr. Mara-Julia Weber for their help.

Although the Society has its roots in Germany, its members are from different parts of Europe, and their research are truly international. During the three-day-long program, the audience could hear from the Lower Palaeolithic to the Mesolithic, from Siberia to South Africa, and from Crimea to Spain. Among the talks and posters, Hungarian developments got the opportunity of presentation as well: Zsolt Mester, Árpád Ringer, András Markó, György Lengyel, Krisztián Zandler, Attila Péntek and Attila Király presented their actual research. The program and abstract book of the meeting can be accessed at the Society’s website (www.obermaier-gesellschaft.de).

The sessions were followed by two days of excursions around famous locations of the Quaternary in Hungary. We visited the loess profiles of Paks and Dunaföldvár, archaeological sites of Vértesszőlős, Jankovich Cave, Tata-Porhanyó, Dunakömlőd and the Százhalombatta Archaeological Park.

Dear colleagues, we are thanking the opportunity for cooperation, the attendance, Your presentations and discussions. It was an honour and a pleasure to host the annual meeting here in Budapest, and welcome You in the future!

Besides a few pictures of the Meeting, we share here the opening speech of Dr. Thorsten Uthmeier, president of the Hugo Obermaier Society, about our common heritage and actual aspects of Palaeolithic archaeology (indeed it has them): 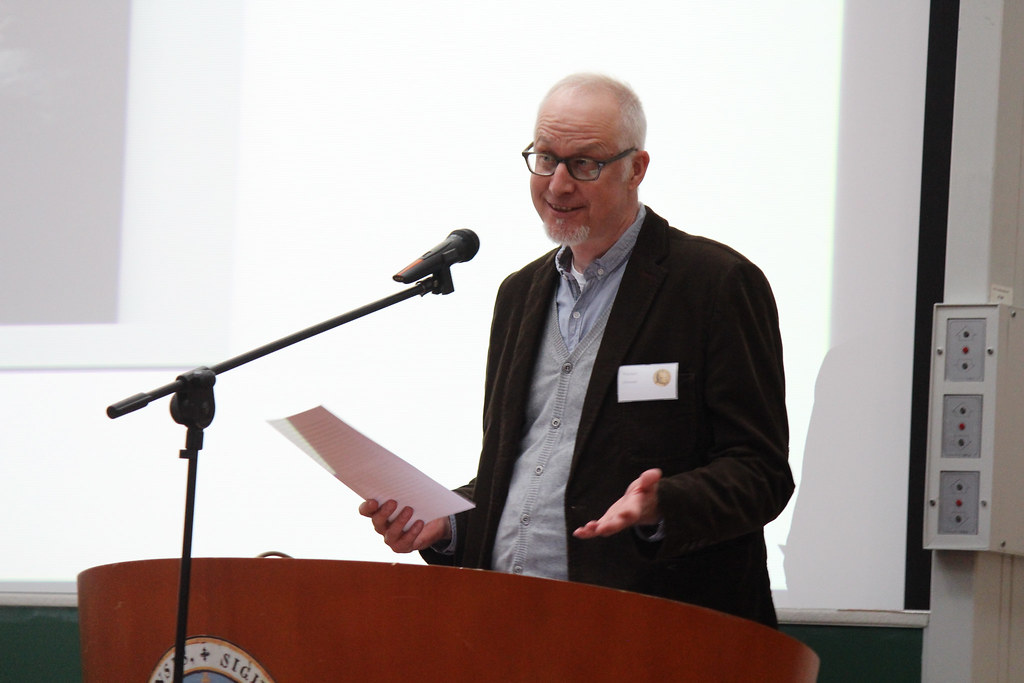 For the first time, the Society´s annual meeting takes place in Hungary. In part, this is possible after Europe wide developments that started with the fall of the Iron Curtain in 1989. Soon afterwards, it was much easier to visit each other, to discuss and jointly work together than it was in the years before the Later, the European Community started to grow, and we all are very thankful for this development. A short look on the list of the cities were annual meetings took place underlines this impressively: since 1989, the Society met in Weimar, Potsdam, Mikulov, Halle, Greifswald, Ljubljana, and Leipzig – all places that were difficult to reach before from the West, as vice versa were places in Western Europe for citizens of the so called Warsaw pact states. Before 1989, the record of activities of the Hugo Obermaier-Society documents only two that led into the latter region: the excursion to Czechoslovakia in 1967 and the excursion in 1971 to Yugoslavia. At latest since the existence of the Schengen zone many of us are used to move freely in between most part of the European Community – much like hunter-gatherers did in Europe until the beginning of the Holocene.

In fact, movements and migrations characterize the entire history of Europe, and especially the early part of it. From an evolutionary point of view, we all descend from African populations that came to Europe via the Near East 43.000 years ago, or even several millennia earlier. The first modern humans used several intertwined routes, one along the Danube, one through the Balkans and one along the Mediterranean coast – to cite only the most popular models. The list of hunter-gatherer movements and migrations inside of Europe is long, with the re-colonization of Central Europe after the scattered settlements of the Last Glacial Maximum being the largest one. These movements have in common that we explain them mainly as triggered by climatic changes, which enabled mobile hunter-gatherers to occupy enlarged territories of their original niche, or innovations that enable to occupy new ones. This changed with the expansion of the Neolithic. For the first time, we observe a severe demographic growth, again in the Near East, triggered by farming and storage. Sometimes coupled with climatic worsening, like the 8.2-event, this led to crises which can be seen as the driving force of the early Neolithic migrations.

In general, it is often assumed that large-scale migrations have negative consequences if they led to areas already peopled by indigenous groups. Prominent example are the demise of Neanderthals or the fate of the Mesolithic hunter-gatherers. However, we now know that:

Clearly, cooperation was the dominant strategy not only for Prehistory hunter-gatherers, who must have been well acquainted with this measure to solve crises and conflicts, but also for the Neolithic groups. 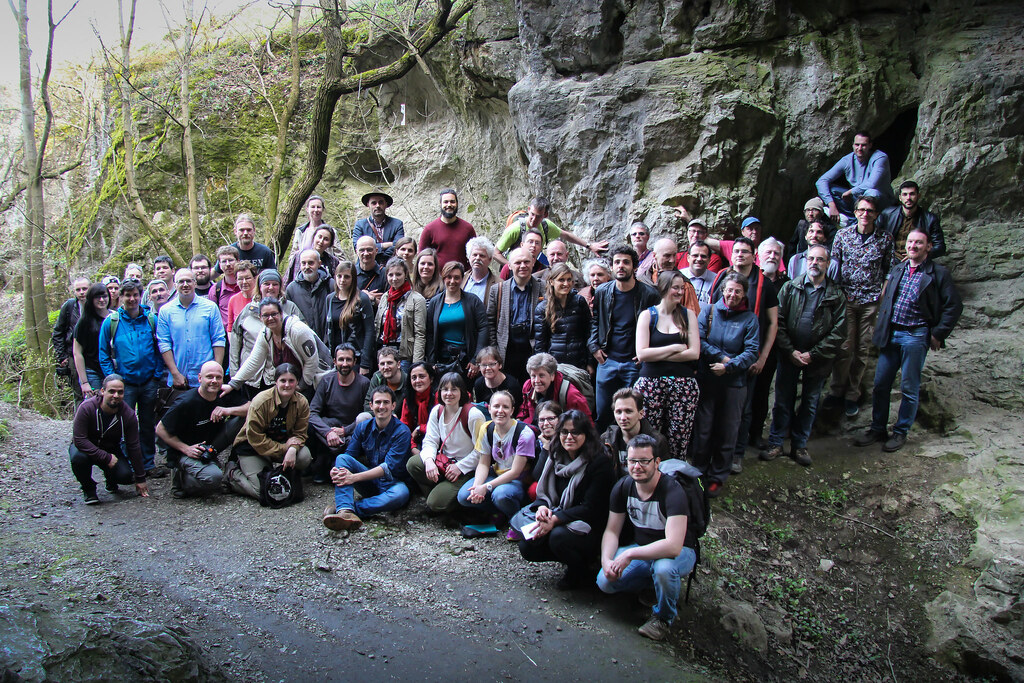 Participants of the conference under the rock arch of the Jankovich Cave, Hungary. Photo: Florian Sauer.
See the whole photo album on Flickr!

Especially since the last year, Europe again experiences a phase of intense migration, again from Africa, the Near East and adjacent areas. Much like in Neolithic times, the reasons for these migrations lie in economic crises, political instability and warfare, and again people take routes along the Balkans. In contrast to the prehistoric migrations, we now get direct information about the people that come, that are stopped on their way by closed borders or even die on their escape.

I was always of the opinion that archaeology is highly relevant not only for the reconstruction of the past, but also for commenting present social and political developments. From an archaeological perspective, we can make some generalizations about the role of migrations in the past:

As a result, the present European population is already a long-term melting pot, and we all profited from that. The new wave of immigrants into Europe is in many aspects a prolongation of a long history of migratory processes deeply rooted in the European recent and distant past. Because we as archeologists know it, we – together with colleagues from the social, historical and philosophical sciences – have to tell this long-term perspective to the public.

Conferences like the annual meeting of the Hugo Obermaier Society are one means to get into contact with the public, with interested amateurs and with colleagues from here and abroad. I am very glad that in this year we are guests of the Eötvös Loránd University. Already now – and it will be not for the last time – I would like to thank the University, and especially Zsolt Mester, for the kind invitation and the work they did already to make this conference become real.

Ladies and gentlemen, apart from the very general aspects of archaeological discourse, the support of the young academics is another aspect that is of great importance for the Hugo Obermaier Society. Thanks to Hertha Halter, who initiated the Hugo Obermaier Research grant with a generous donation, it was possible to award four young academics in the past. After this capital stock ran out in 2014, it was Dr. Wolfram Freudenberg, Stuttgart, who donated the Research prize of this year. I am sure that everybody who participated in the members meeting in Heidenheim remembers very well his spontaneous generosity; I would again like to express the gratitude of the Society for this. For sure, the Society has to make great efforts to keep the tradition of the Research Prize. Nevertheless, it is the wish of the Society to support young scientists for their own projects by this kind of biennial funding also in the future.

The Hugo Obermaier Research Grant of this year goes to Oleksii Mykolaiovych Lyzun. He is a PhD-student at the Taras Shevchenko National University of Kyiv and works on the Epi-Gravettian. Despite the fact that the Ukrainian Epi-Gravettian is rich in important sites such as Mezin or Mezirich, there are still regions and important questions unexplored. Oleksii Lyzun wants to use the Research Grant to investigate the sites of Semenivka III, Sushchanka, Borova and Bespalche with a focus on the raw material procurement strategies. Dear Oleksii, congratulations for the funding – we wish you success for the fieldwork and are keen to hear the results on the next annual meeting.

To finish, I wish the 58th Annual Meeting of the Hugo Obermaier-Society stimulating talks, vivid and fruitful discussion, a successful poster presentation and an interesting excursion.”